The City of Angels boasts the nation’s second-largest economy — and a massive housing shortage. For those who can navigate the complexities of building new homes in LA, opportunities to earn outsized returns abound.

The entertainment industry is just one piece of a large, diversified economy.

The greater LA area has a gross metropolitan product of $866 billion (as of 2015), making it the third-largest local economy in the world. Though best-known as the entertainment capital of the world, LA’s economy is diversified across industries ranging from aerospace engineering to logistics. We believe that LA’s dynamism and diversification will enable it to stay relevant and growing, even in the face of major national economic shifts. 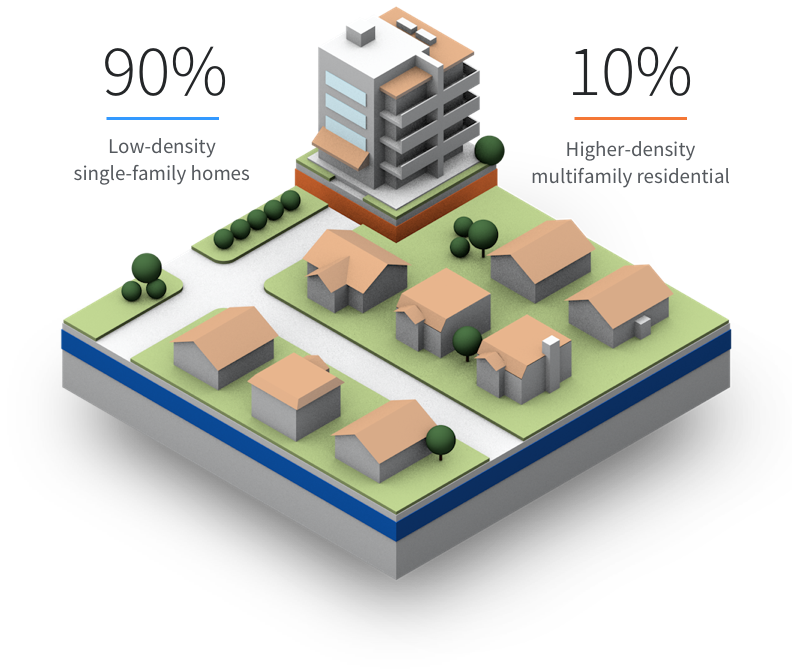 State-level environmental regulations, coupled with local zoning restrictions, make it more difficult to build new residences in Los Angeles than almost anywhere else in the country. According to Forbes, the city has added less than one new housing unit per seven new residents since 2010. Since demand for real estate in the area is high but the ability for developers to meet this demand with new construction is limited, the few nimble operators who are able to do so successfully are poised to reap outsized returns.

There is a severe shortage of reasonably-priced new homes for sale.

According to Trulia data, LA is the second-least affordable city in the nation for first-time homebuyers, after its northern California counterpart, San Francisco. The median starter home price is now more than six times the median Los Angeles household income, which means that a traditional 20% down payment now exceeds an entire year’s salary for the median household. Developers who can keep costs low and bring reasonably-priced new homes to market are expected to realize healthy profits as buyers compete over these homes.

In an effort to combat the massive housing shortage, the LA city government has legalized the redevelopment of detached homes into “mini-subdivisions” of small-lot row homes. Put another way, this means that you can turn one housing unit into five or more. This model carries the obvious potential to earn an attractive return, but requires active attention paid to many relatively small projects — making it unfeasible for larger, inefficient institutional investors, and ideally suited for a small, agile team like ours.

Unlike older cities on the East Coast, LA’s growth has occurred mostly in the age of the car and the suburb. This has translated to sprawl: when older neighborhoods became less desirable, people simply abandoned them and moved further out. However, the trend appears to be reversing, as millenials show a strong preference for walkable, urban areas. We are actively acquiring homes in well-located neighborhoods that have seen hard times, but are poised to make a comeback in the near future.

All assets in Los Angeles