We often talk about how Fundrise is a long-term investment. We aren’t just referring to liquidity, though — we’re also referring to the shape of investors’ overall return profiles.

In 2019, Fundrise produced a total net platform return of approximately 9.47%. But in many ways using a singular weighted average figure to represent the entirety of the platform’s performance oversimplifies the actual diverse experience of our investors on Fundrise, as well as the fundamentals of how investing in real estate actually works.

At the end of 2019, Fundrise had more than 120,000 active investors. Those investors ranged from having spent as little as one day on the platform to more than five years. Collectively, they invested in portfolios composed of as many as 16 different eREITs and eFunds, as well as many project dependent notes (the predecessor of the eREITs), with investment objectives ranging from generating consistent income, to maximizing long-term growth, to a balanced blend of each. As a result, nearly every one of our investors had a unique return for their Fundrise portfolio based on their specific set of individual circumstances.

While 9.47% was the net overall platform return, only a few investors earned exactly 9.47% — most earned either a little more or a little less, and some earned a lot more or a lot less.

What nearly all 120,000 investors had in common was this:

An investor’s unique return for the year was highly correlated to the amount of time they’d been investing with Fundrise.

Historically, the less time investors had been investing the lower their likely returns, while the more time they’d been investing, the higher their likely returns. We highlight this not because we believe it will always hold true in all circumstances, but because generally speaking we believe it can help investors understand what makes investing on Fundrise different from investing in the stock market (of course, it is important to always remember that past performance cannot and does not predict future outcomes, which may vary greatly from what has occurred previously). 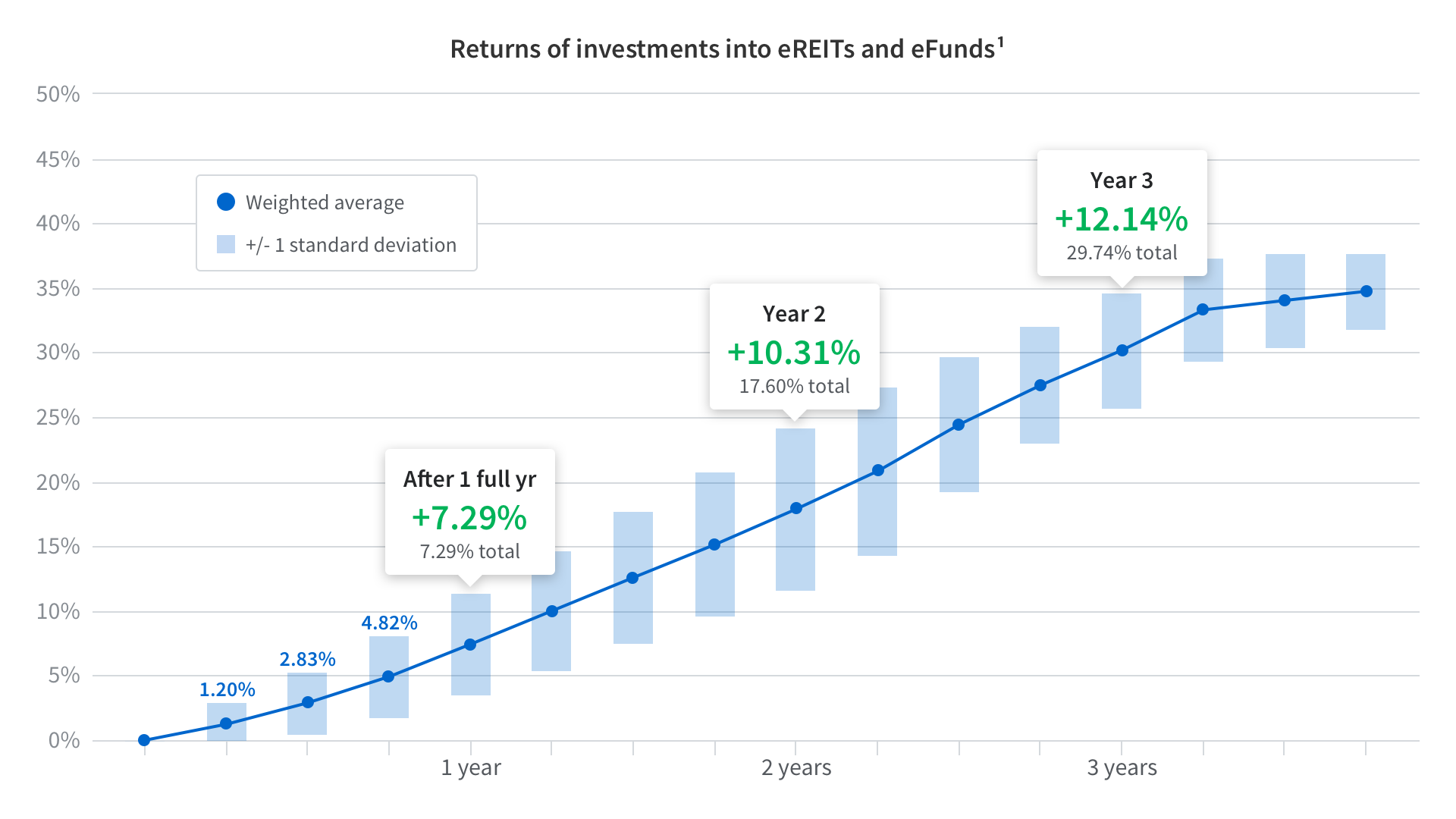 Put another way, on average, the historical rate of return for Fundrise investments has generally started out lower and increased over time.

Why does this occur? Though there are multiple factors involved, a primary reason is that investing in real estate (by which we mean owning actual physical properties, not public REIT stock traded on an exchange) tends to follow what is called a “J” curve return profile.

A “J” curve investment is an investment that follows a pattern where realized returns tend to be lower — or even negative — in the early period of the investment, often as a result of both money and time being invested into creating value, with the majority of the return on that capital and work realized towards the later portion of the investment period.

In terms of real estate specifically, it’s easy to imagine buying an old, run-down apartment building with many vacant units and low relative rents as a result of its poor condition. After purchasing the property, you may invest significant capital into making improvements; adding HVAC, hardwood floors, new kitchen cabinets and countertops, stainless steel appliances, fresh carpets and paint, and maybe a nice community fitness center and pool.

Between obtaining permits, negotiating with contractors, and performing the work, improvements may take several months or even a couple of years to complete. Once finished, however, the property begins to lease up as a result of the renovations, with most tenants (including many of the existing ones) willing to pay more in rent because the property is now much more comparable to other significantly newer and nicer apartments. Over the next 12 - 24 months, you’d expect the income from the property to increase dramatically. And eventually, you may choose to sell the asset at a premium to an investor who is pleased to own a recently renovated property that is fully leased at top of market rents.

In this scenario (a strategy we’ve deployed often across our portfolio), you’d likely experience little to no return for the first couple years, with cash flow from rent only picking up well after the renovations are completed. The bigger “pop” in your returns may ultimately not be realized until even later, when you either sell or refinance the asset. Such value-creation business plans, or variations on it, are at the core of most private real estate investing and central to the way investing with Fundrise works.

This general phenomenon can be seen in practice simply by looking at the performance of the Fundrise Growth eREIT, again emphasizing that past performance is not necessarily indicative of future results: 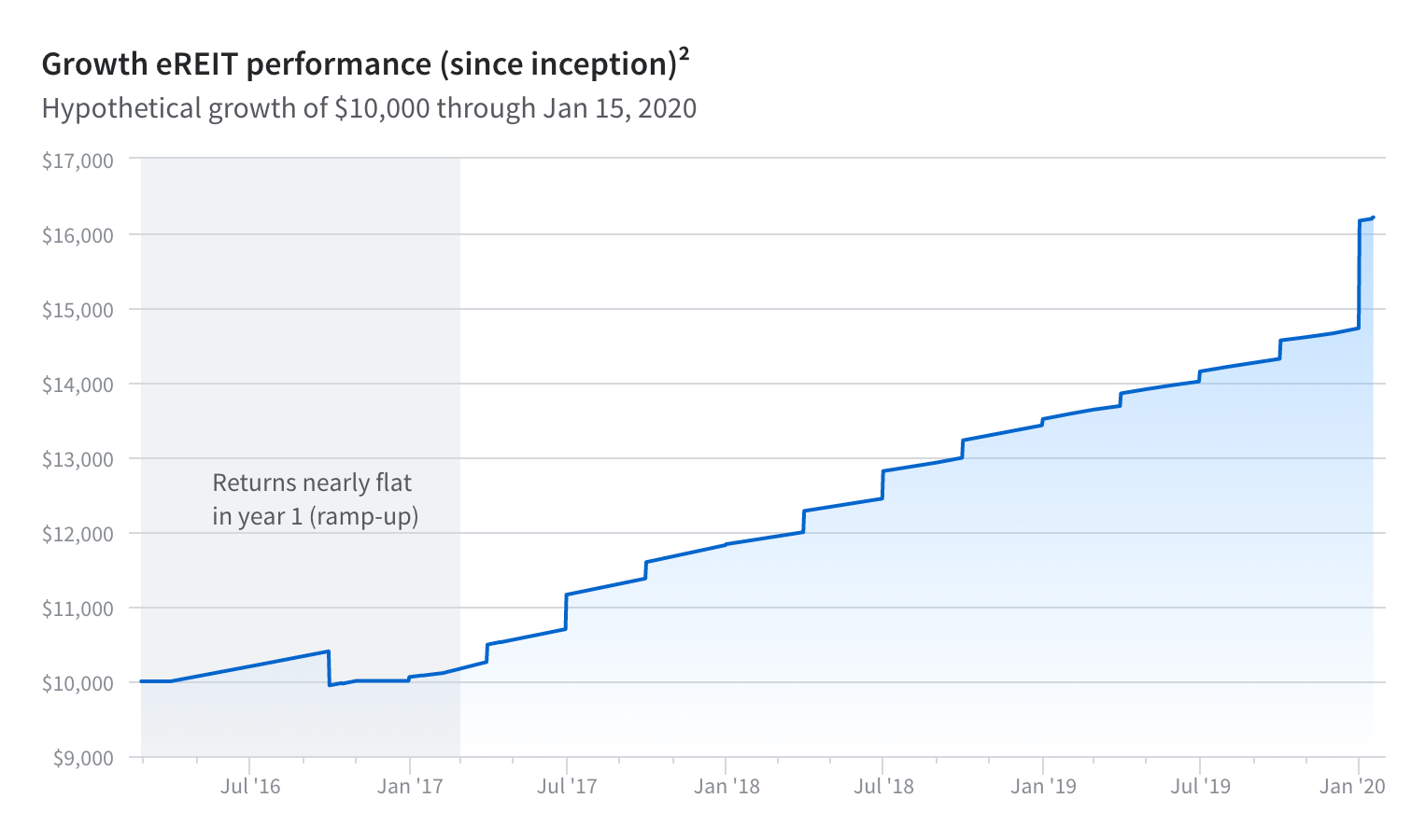 When looking at the lifetime performance since inception, at first glance it may appear as a steady upward trend since the fund first began accepting investments in February 2016. However, when you look closer at the first year, you can see that returns were nearly flat during this ramp-up period.

By combining an understanding of the nature of a J-curve return profile with the previous data around returns by time on platform, you can start to recognize that investors who have been investing on the platform longer will naturally have a larger portion of their portfolio in properties that are further along in the maturity of their business plans and therefore are starting to capture a greater return. In contrast, newer investors, typically having a portfolio with a greater portion of assets that are still early in their business plans, would not yet have realized a substantial return.

What about income-focused investments?

The J-curve principle also applies to real estate investments focused on generating income, though generally to a lesser extent. In real estate, income-focused investment strategies typically consist of either buying already-stabilized properties which generate regular income through rent, or by providing financing via a loan or other debt-like structures to the developer of a property, who then pays regular fixed interest payments.

You can see the J-curve manifested in the relative performance of investments in income-focused vs. growth-focused portfolios. 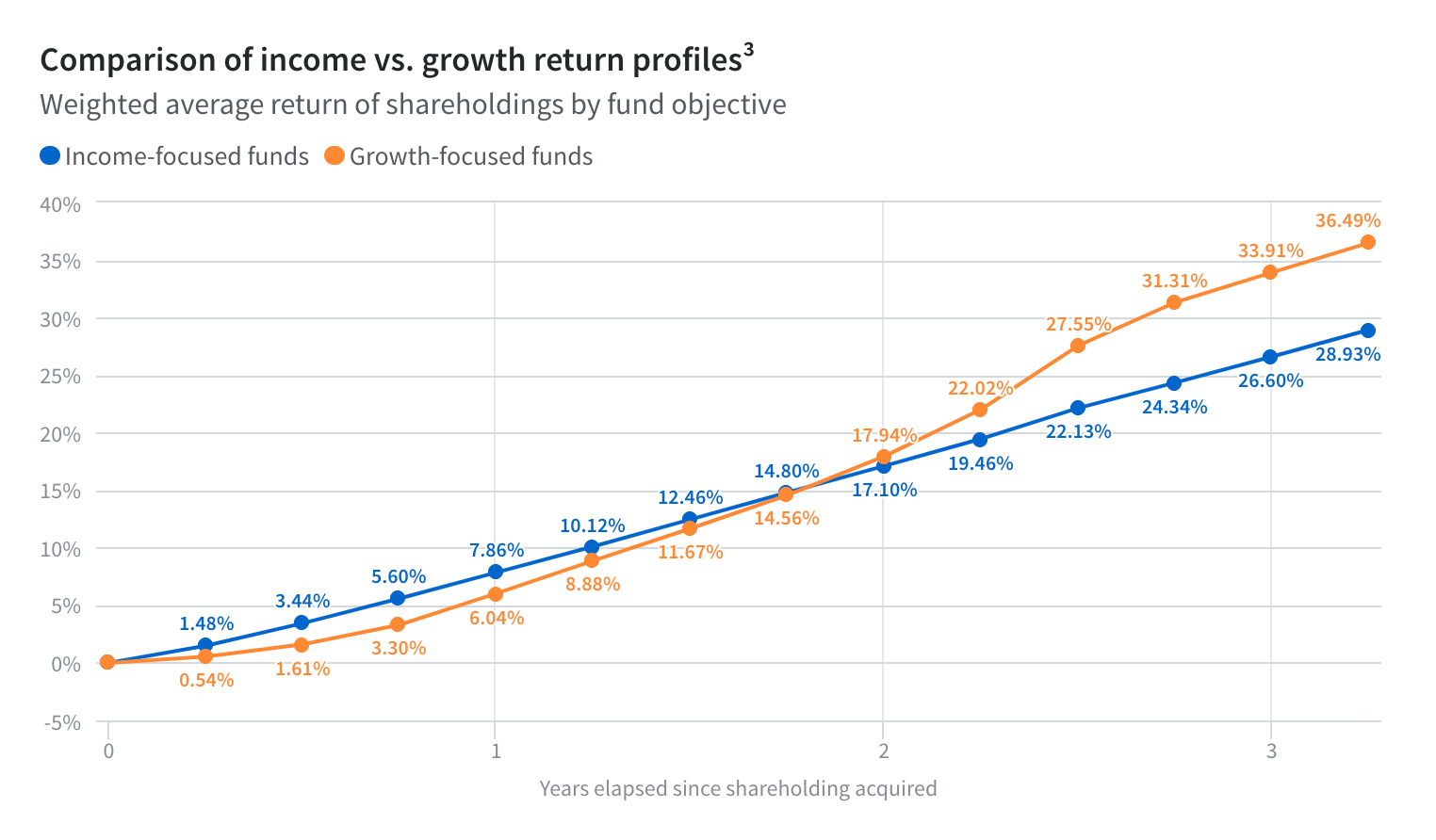 Investing in real estate on Fundrise is a lot more like investing into a portfolio of companies that are still in their high-growth pre-IPO phase than it is like owning an index of mature, publicly traded companies.

A large portion of any returns comes directly from the value added to the property. Because performance is so much more closely tied to the properties and execution of their business plans, it follows a natural trajectory in the form of a J-curve that takes time to play out: an initial period of low expected returns as properties are acquired and business plans put into action, with a potential harvesting of the value creation in the form of higher returns in the later portion of the investment period.

Therefore, Fundrise investors should not only expect for returns to be lower than the platform average if they’re in their first year or two of their journey with us, but if they’re like us and like to think long-term, they might actually get excited about owning a portfolio that is heavily weighted towards properties that are in this early “incubation period” where we are building up the potential for higher returns in the future.

We hope you find this helpful, and as always, please don’t hesitate to reach out to investments@fundrise.com with any questions or comments.

If you’re not yet a Fundrise investor and would like to join the future of real estate investing with an account of your own, get started here.

1 Data set consists of the weighted-average cumulative return over time of shareholdings issued in each of the eREIT and eFund programs from December 5, 2015 through January 13, 2020. Estimated returns presented do not assume dividend reinvestment, and are net of fees.

2 This chart shows the hypothetical growth of a $10,000 investment in the Growth eREIT over the period indicated, assuming dividend reinvestment, and net of fees. Similar performance information for each eREIT and eFund is available on each fund’s individual offering page, which may be found at fundrise.com/offerings.