Property Story — The Reserve at Mandarin in Jacksonville, FL

Every Fundrise portfolio aims to diversify with a broad mixture of properties. Here’s an example of one deal that has powered investors’ portfolios, having successfully completed the full investment process. You can view all active and past projects here. 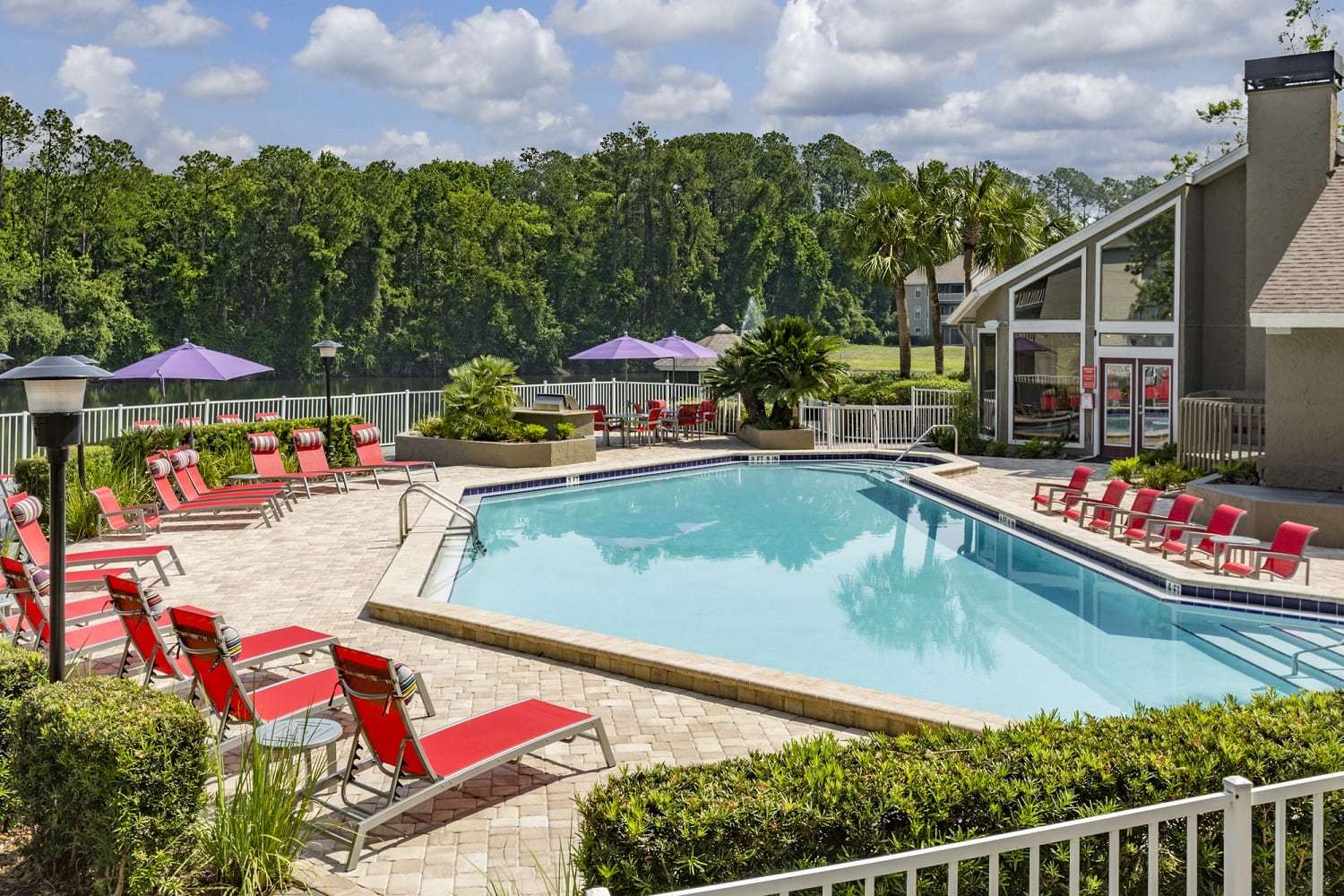 The Reserve at Mandarin is a 520-unit apartment community in Jacksonville, Florida. In June 2016, we partnered with American Landmark Apartments — a real estate developer with a strong track record and significant experience in the Jacksonville area — to acquire and renovate The Reserve at Mandarin. After renovation, the plan included renting the strategically upscaled units at increased rental rates, eventually producing a strong bottomline return through the sale of the property. Our equity investment in The Reserve totaled $10,850,000.

Success at The Reserve at Mandarin came quickly: in fewer than 24 months, our partner, American Landmark Apartments, completed the planned renovations. As a result, we saw net income at the property increase by roughly 30% in the form of higher rental rates, driven by the renovations’ improvements in unit quality, sense of luxury, and tenant demand.

Furthermore, these income increases directly translated into a meaningful appreciation in property value. Shortly after renovations were completed an appraisal ordered by Capital One as part of the project’s refinancing stated that the value of the property had improved by an impressive approximate 38%.

Another year after the renovations were complete, in October 2019 we were proud to share with our investors that we had successfully sold The Reserve at Mandarin. Between the rental income we received during the course of the investment and the profits from the sale, we achieved an annualized return of roughly 20.4% (more than 1.6x our original investment over three years), substantially outperforming our initial return projection of roughly 11-13% annualized.

Initially, we’d planned to hold the property for several years after completing renovations. However, we saw such strong interest from buyers that we ultimately decided to sell at a roughly 47% profit, net of transaction costs and prepayment penalties. To be clear, these results are exceptional and are not something we expect to be able to repeat with every investment. In particular, we believe this investment benefitted from the market’s relative undervaluing of the Jacksonville apartments in 2016, when we acquired the property.

A strategic overhaul, to impressive effect

When we first acquired the property, it was in need of a serious facelift. The finishings were outdated, and the units felt small and dark. Based on our carefully diligenced business plan, our partner was able to complete the renovation of the entire property with great speed, which, in turn, allowed us to start benefiting from higher rental rates from tenants as soon as possible. They replaced countertops and cabinets, upgraded bathrooms, and remodeled the common areas.

In the images above, you can see the transformational effects of expanding these areas through effects of light and space, excavating what were once gloomy, dank environments and carving them into airy, breathing homes, with glowing brightness and uplifting colors. Even community spaces — such as the property’s leasing center, pictured in the second set of photos — saw significant upgrades as part of the renovation plan, fundamentally overhauling The Reserve at Mandarin’s look, feel, and sense of movement.

Upgrades like these, executed so well and with such speed by American Landmark Apartments, drove the ultimate returns we were able to realize for Fundrise through this investment, further strengthened by the inherent qualities in the Jacksonville area. While the results immediately produced by this fundamental renovation were impressive — again, the asset’s net income increased by 30% within 24 months of our acquisition — we wrote in June 2018 that we still believed that The Reserve at Mandarin still had meaningful room to grow.

This belief was bolstered by our understanding of the surrounding market: thanks to a large shipping and military presence, Jacksonville was set to continue to be one of Florida’s strongest economies. The climate and generally affordable cost of living makes the area a desirable place to live. As of January 2018 (shortly before renovations were completed), unemployment in Jacksonville was 3.9%, below both Florida’s and the nation’s averages.

Whit Booth, Fundrise’s VP of Real Estate, took a moment to outline some of the characteristics that the team noted when deciding to invest in The Reserve at Mandarin. “American Landmark Apartments — our sponsor on this deal — had a tremendous track record of success in Florida,” Whit said. “They also knew this submarket and neighborhood well. Mandarin has historically been a section of Jacksonville with strong real estate performance. At the same time, we knew that the city was in the midst of a strong underlying growth demographic, which was not garnering a high level of institution focus on investment. In other words,” Whit noted, “there were promising demographic moves afoot, but they were below the radar. We recognized an opportunity.”

“This particular property had a track record of proven rent increases,” Whit explained, “which had already been initiated by the seller. We saw they were supported by comparable nearby properties. We felt really good about our discount to replacement cost, too. It would have taken roughly twice as much as what we paid to build the same asset from the ground up. Taking all these factors together, we were confident in this deal.”

A prime example of a star property from the Sunbelt

Many of the features that made The Reserve at Mandarin an attractive investment directly align with the characteristics that drive our pursuit of opportunities in the markets that make up the region we refer to as The Sunbelt. These markets, showcasing pleasant climes and temperate seasons, stretch in an arc (or, naturally, “belt”) across the center of the U.S., representing some of the key locations where our team actively seeks acquisition and investment opportunities.

On top of the booming nature of these places, an often overlooked benefit of investing in markets with relatively warm climates relates to the building maintenance expenses and risks associated with cold weather. Cold climates can cause both exterior and interior pipes to freeze, while winter storms, hail, and the like can cause power outages and exterior damage. As a consequence, buildings in warmer areas can be less risky and expensive to maintain than otherwise identical buildings located further north.

Some coastal investors might be surprised to learn that southern cities account for two-thirds of urban population growth in the US. According to Census data, 10 of the nation’s 15 fastest growing cities are in the Sunbelt, with population growth in major southern cities averaging nearly 9.5% since 2010, compared with 1.8% and 3.0% in the Northeast and Midwest. Texas and Florida have seen state-wide growth, while the regional population centers of Phoenix and Atlanta each added roughly a quarter of a million residents from 2013 to 2015.

Reasons like these are why finding experienced, reliable sponsors with rich local experience is so important. When we invested in The Reserve at Mandarin in 2016, this was our first project with American Landmark Apartments. Through its success, we’ve developed a strong relationship and have since invested in 16 additional projects together.

We’ve remarked in a variety of places about our opinion on the current status of the business cycle and its late nature — in today’s environment, we believe that record asset prices have made opportunities like The Reserve at Mandarin increasingly rare. To be clear, these results are exceptional and are not something we expect to be able to repeat with every investment. That emphasizes even further how fortunate it was that we identified this asset and acted accordingly, teeing up quick renovation improvements, which served strong returns along a relatively swift timeline, to the benefit of the investors on our platform.

Interested in opening your own Fundrise portfolio, where you can potentially benefit from direct access to private market real estate investments from all over the country? Get started today with the Fundrise account option that best fits your investing needs.